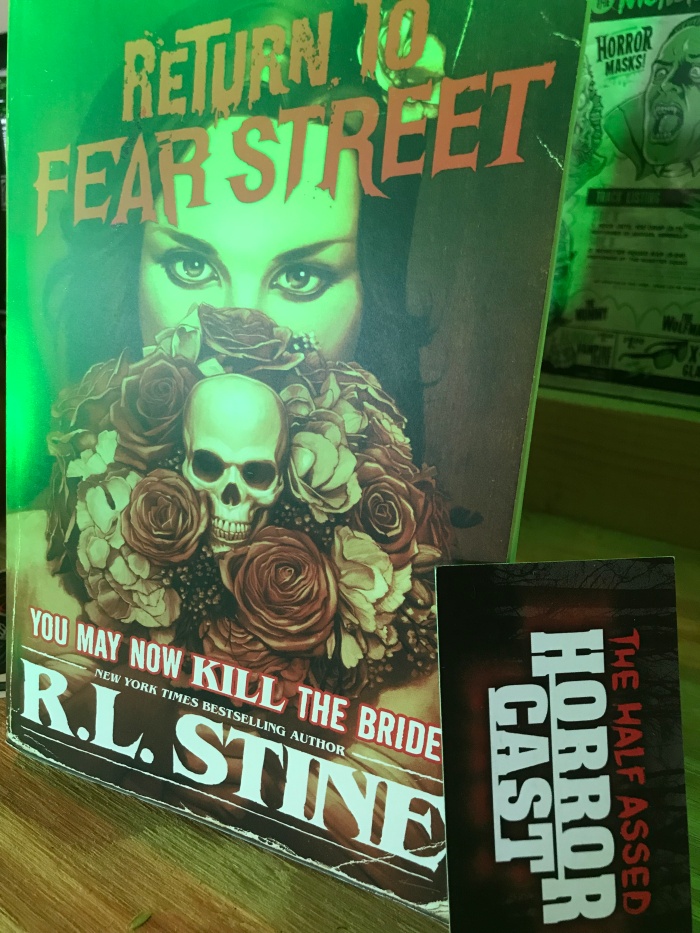 Hello fellow travelers!  I’m sure you all remember that in my very first Fear Street blog post, I mentioned a new series called Return to Fear Street, and in my August post I shared the beautiful cover art from the first book in the new series, You May Now Kill the Bride.  Well, I have since read this book and will share my thoughts on it and future books in this new series in these special edition posts.  I can just see the ear-to-ear smiles on your faces! So let’s get started. And I’ll be immediately spoiling this book, so consider yourself warned.

The premise of You May Now Kill the Bride from the blurb on the back of the book is that a curse that haunts the Fear family affects two sisters at two Fear family weddings decades apart.  Seems pretty straightforward. The story begins in 1923. Seventeen-year-old Ruth-Ann Fear discovers a secret attic in her house where she finds old spell books and learns about the hatred between the Fear family and the Goode family.  Ruth-Ann starts doing spells and casts a spell on a boy named Peter Goodman to get him to like her. He does initially but ends up falling for her older sister Rebecca. However, at the wedding (which takes place the following year on a cliff at the Fear family lodge in Colorado), Peter picks Rebecca up right after kissing his new bride and hurls her off the side of the cliff.  Why? Well, you probably didn’t see this coming, but Peter Goodman is actually Peter Goode, and there is a curse where a Fear and a Goode can never marry each other and live. Well, Ruth-Ann’s father gets upset with Ruth-Ann because when she found out about Rebecca and Peter she got upset and told them that they would never get married. Ruth-Ann and her father struggle and then SHE falls off the cliff after losing her balance.  The moral of this story – don’t have a wedding on a cliff. Ruth-Ann’s father gets even more upset as can be expected and vows to take his revenge on the Goodes. The fact that Ruth-Ann dies was a great mislead because I really thought she was going to a be a more prominent character throughout the story, and I thought this was a great start to the book. It was well-written and just really grabbed my attention as a reader, and I thought that R.L. Stine was back with a great new series!  Mr. Fear will have his revenge and somehow that will affect a future generation of Fears and Goodes – just like the back of the book promised!

Well…none of that happened.  The story flashes forward to present day – we’re back at the Colorado lodge, only now it’s no longer part of the Fear family because it was sold.  Our main character is now seventeen-year-old Harmony Fear, and she and her family are at the lodge for the marriage of her older sister Marissa to Doug Falkner.  Harmony and Marissa’s father says the place is cursed and that that’s why it was sold, and some of the family know about what happened there in 1924. But Marissa’s heart is set on getting married there, so we’re back for another wedding…on a cliff.  What could go wrong? Well, shenanigans happen the day before the wedding, including an uncle choking on chicken feathers and the wedding party getting attacked by squirrels. Uh-oh! Must be the curse! But no, it just turns out to be Harmony doing some silly spells because she also discovered the Fear family spell books.  Her grandfather warns her about doing even harmless spells at the lodge because the place was cursed and spells could get out of hand. The grandfather, Harmony, and Harmony’s brother Robby talk about what happened at the lodge back in 1924 and about the hatred between the Fears and Goodes that went back hundreds of years, but the grandfather mentions that no members of the Goode family had been heard of since then and that Harmony and Robby’s father hired two different investigative firms to make sure none of Doug’s family were related to the Goodes.  As a reader, I’m thinking “Oh, there’s definitely a Goode at this wedding and the curse will strike again.”

Wrong again.  Turns out the curse between the Fears and Goodes was stronger than anyone realized.  Remember when Peter threw Rebecca off the cliff back in 1924? Well that happened right after they were officially married.  The curse was unleashed – hence Peter killing Rebecca. But the curse also caused people to be trapped in the lodge after death – they were dead but not dead and unable to control when they lived, sometimes living in their own time but sometimes living in the present.  This curse trapped Ruth-Ann and Rebecca and also some lodge workers from 1924 who Harmony talked to, thinking they were workers from the present time. This curse also traps Marissa. On the day of her wedding, she goes missing, and it turns out that she was killed when she was pushed off of the cliff.  But she wasn’t killed by a Goode – she was killed by her scorned ex-lover Aiden Murray. Not scorned because Marissa dumped him but scorned because, about a year ago back in Shadyside, Harmony injured his hand while doing some woodworking and ended his dream of becoming an orthopedic surgeon. Harmony discovers Marissa, Ruth-Ann, and Rebecca at the lodge where she learns about Aiden’s actions.  She also learns that Aiden has taken out his revenge on Robby by stealing his girlfriend. I understand being upset at Harmony for injuring his hand, but it seems far-fetched for Aiden to be so angry at the other family members. Plus his revenge on Marissa and Robby seems extremely unbalanced – I mean Aiden went from stealing someone’s girlfriend to pushing someone off a cliff. Talk about going from zero to a hundred.  This all gets wrapped up when Harmony goes from doing silly spells to a big spell – transporting herself back to 1924 where she uses another spell to send Peter flying off of the cliff before the Fear-Goode marriage can take place and unleash the curse.

I left this book just feeling really confused.  I’m unsure how Harmony stopping the Fear-Goode marriage would impact the present day events.  It would keep people from being trapped at the lodge after death, but I don’t understand how it would’ve kept Aiden’s hand from being injured back in Shadyside and then seeking his revenge.  The book makes clear that the lodge is cursed, so it’s unclear as to how the events in Shadyside would have been prevented from happening. Also, I thought that Ruth-Ann and Rebecca’s father’s swearing to take revenge on the Goodes would have something to do with the rest of the book, but as far as I can tell that was a big dud.  Maybe his revenge has something to do with why no member of the Goode family has been heard of since the events in 1924, but that’s just speculation on my part. The book also gives no details as to the why the Fears and Goodes hate each other so much or why the Fears, according to Harmony, have a long history of meanness. Maybe Stine already dealt with this in one of his previous books – I know he’s written several on the history of the Fear and Goode families.  But I don’t think it’s safe to assume that new readers will be familiar with the older books or that old readers (like me) will remember or that we even kept up with the series. I know that I stopped reading the Fear Street books in the early 90s, and I definitely don’t remember the specifics of the books I read when I was kid.

Also, I didn’t get the point of the magic spells.  Maybe this also harkened back to an earlier entry in the Fear Street series, but it seems misplaced and pointless in this book.  I’m guessing the whole purpose for the spells was so that Harmony could all of a sudden become a powerful magician or sorceress (because her grandfather tells her earlier that he believes the magic runs in their family) and transport herself back to 1924.  It all just seemed a bit too convenient for me.

I didn’t really like this book (in case you couldn’t tell) and gave it 1/5 stars on Goodreads.  A lot of other reviewers gave it three or four stars, but I noticed that most of those reviews started with the reader going on about nostalgia and how they loved Fear Street when they were younger.  I’m not reading with my nostalgia glasses on, so this was a big miss for me. I’m still looking forward to the next entry in this new series, The Wrong Girl, which comes out later this month.  From the description on Amazon, it doesn’t seem to involve the Fears or Goodes.  So if you’re dying to know about the Fear-Goode saga or need to refresh your memory, you might need to track down the older books.  I’ve had a rough patch of disappointing books here recently – The Elementals by Michael McDowell, Hex by Thomas Olde Heuvelt, and You May Now Kill the Bride.  I read the new Flintstones comic by DC to clear my palate but was a little disappointed by that too (although I loved the artwork).  So, where do you go when you want maximum entertainment and minimal disappointment? The world of organized crime – Wiseguy: Life in a Mafia Family by Nicholas Pileggi.  I’ve seen Goodfellas plenty of times but now I’m ready for a little deep diving.  Hmm, going from the Flintstones to the Mafia. Makes me think of one of my high school friends who wrote in my yearbook about me buying Britney Spears and Metallica CDs at the same time.  I live outside the lines. See ya in October!

Kia is a cohost of the Half Assed Horror Cast. Her favorite horror novel is Scott Smith’s ‘The Ruins,’ fave slasher is Freddy Krueger, and her favorite TV show of all time is ‘Buffy the Vampire Slayer.’