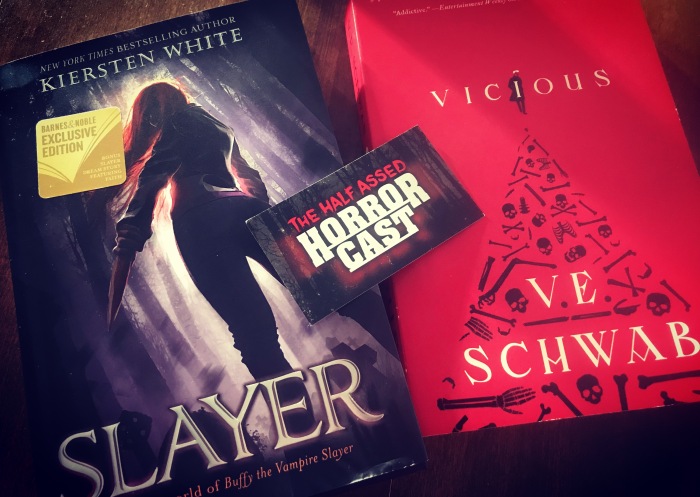 Hello again!  It’s been awhile since my last blog entry, and my plan was to pick up again with my Back to Fear Street series.  However, I was starting to get a bit burned out, and I had some not so enjoyable experiences revisiting the series and checking out the new books.  So, I decided that I would go back to reading whatever I want. I’m off to a pretty good start – I’ve read seven books so far this year which is pretty good for me, and there’s a couple I’d like to recommend.

The first is Vicious by V.E. Schwab.  This book came out in 2013, so I was tardy to the party but better late than never.  Vicious is the story of two college roommates who discover a way to develop super powers.  But then something goes horribly wrong, as things tend to do when super powers are involved, and the two friends become enemies.  Think Professor X vs. Magneto. I loved Vicious and gave it 5/5 stars on Goodreads.  If you enjoy reading comics, I think you’ll find this book to be right up your alley.  But even if you don’t, it will still be a great read! Schwab does a fantastic job at world-building without being overly complicated, and her characters are complex and well-developed.  A sequel to Vicious entitled Vengeful was released in 2018.  I haven’t read it yet but definitely planning to.  I also read that the rights to a film adaptation were purchased, so maybe we’ll be seeing this story on the big screen.  But if not, it’s definitely worth a read!

My second recommendation is Buffy-related, which if you listen to our podcast will come as no surprise. Slayer by Kiersten White is a 2019 release about…a slayer.  But not the one we all know and love. There’s a new slayer in town, and her name is Nina.  There’s just one tiny complication – she’s also part of the Watchers, an organization that works to protect the slayers.  Before Nina even gets a chance to adjust to her new calling, a host of demons and monsters show up, and her powers as a slayer and her duties to the Watchers are put to the test.  I LOVED this book and gave it 5/5 stars on Goodreads. I think a newcomer to the world of Buffy would enjoy Slayer because it’s just a lot of fun if you’re into supernatural fiction.  However, as an OG fan of Buffy, this book was truly rewarding. Talk about Easter eggs!  If you loved the movie, TV show, AND the comics, you’ll definitely get a lot out of Slayer.  There’s so many references that aren’t necessarily key to the plot but that just add so much to the story because this book very much so takes place within the Buffyverse.  But in addition to the references, we also get some visits from some much beloved characters who do factor into the plot. I won’t reveal any surprises because if you’re as big a Buffy fan as me, the payoff is worth the wait.  I read on Goodreads that this will be a duology, but I would love for it to go on and on. It’s obvious from both the story (and from the acknowledgements at the back of the book), that the author is an OG Buffy fan herself. She wrote Slayer with a lot of respect to the original material and gave us a host of new complex characters and adventures to enjoy.  I highly recommend this book if you’re a fan of supernatural fiction, and it’s a must-read if you’re a fan of Buffy!

Hopefully I’ll have more recommendations soon!  There’s a lot to read out there, and a lot of it’s on my many bookshelves.  So on to my next adventure!

Kia is a co-host of the Half Assed Horror Cast. Her favorite horror novel is Scott Smith’s ‘The Ruins,’ fave slasher is Freddy Krueger, and her favorite TV show of all time is ‘Buffy the Vampire Slayer.’